It was another December day trip when 6 intrepid boaters decided that we should visit some of South Wales’ finest rivers. Initially we paddled an uneventful Tavy which was lovely. We then decided to run the Mellte which on the face of things was a great idea. It is not to long a drive from the bottom of the middle Tavy to the top of the Mellte. From there it is a bit of a yomp in to the top of the Mellte. Keep an eye out for this phrase later. The walk in is a pain and after we ran the shuttle it was about 1400 by the time we sneaked around the first drop and launched in. On the walk in a guide for about a dozen sodden children wandering around South Wales assured us that this was going to be a great level and he was jealous. This boded well for a good run of this river.

Everyone who has done this river comments on the drops, which makes everyone else think this river is like a staircase but in reality it has a lot of nice technical rapids of the kind I like. We floated off employing good group communication tactics and it was initially uneventful and at a good level. After a couple of rapids we came to the large drop that everyone gets out and films. Pretty much the money shot of the whole run. I didn’t feel the love when I saw it so I decided to walk round the drop. Typically I have no issues walking things. I try not to feel peer pressure too much remembering that at the end of the day this is a hobby and I have to do enough things I don’t want to do normally. Everybody else ran the drop and it was mostly uneventful. When I say uneventful I actually meant Simon swam and when I mean Simon I actually mean Simon Knox. Since I walked I felt that I wasn’t really in a position to laugh out loud but the four others made up for me.

After we tidied up and captured all of the gear we set off again into the gloom of a damp South Wales where the river became a very pleasant pool drop style river with reasonably simple grade 3\4 rapids where typically you’ll paddle round a corner, plop over a drop and punch through the hole at the bottom, repeat a couple of times and then relax in the pool at the bottom. I quite like this style of kayaking where you can pretty much just read and run and as long as you have your wits about you it will be fine. But if you decide that you should pull up along side a tree in the middle of a rapid, get out and let your boat run the rest of the rapid solo, Ludo, that is fine too.

We were just coming up on one such rapid where Simon Knox and Ludo were in front. Simon paddle round a corner and disappeared. Ludo hung around for a bit and then floated off round the corner too. I eddy hopped to the eddy where Ludo was and saw Simon standing at the bottom the rapid and Ludo having a scout. Since Simon had made it to the bottom I decided it was good to go, signalled Fattaur to my eddy told him I was going to do the usual ‘centre-left with feeling’ line and I’ll see him at the bottom. This went well but when I spoke to Simon at the bottom eddy he said that he had swam in a hole and his boat was somewhere between there and the sea. This probably explains the scouting. It was a little boily on the rapid but everybody else who wasn’t French made it down fine. We fished Ludo out.

This was the beginning of the yomp. As it transpired, Simon’s boat was in an eddy just immediately upstream of the portage that looked a bit evil to be honest. We attempted to get Simon’s boat and in retrospect ferry gliding across to the boat was probably sub-optimal and getting out upstream and walking down might well of worked better but it is the thought that counts. The nub of it is that Simon’s boat went down the nasty rapid but I didn’t! We had to walk out to the cars which was a pain but doable. We shouldered our boats and the walked down the path until we came across Simon’s boat stuck in a tree. Ludo and Fattaur kept walking to get to the cars and everybody else rescued Simon’s boat that was more or less intact. Now the issue we had was darkness and carrying a creek boat out of a dark gorge with no torch sucks or is character building. Simon complained that if he had actually lost his boat then he wouldn’t have to carry it. It was quite tiring and by the time Ludo and Fattaur met us I had built up a sweat in my drysuit and I was tired and hungry. What could go wrong now.

Well I dropped my phone in a puddle which was disappointing but not disappointing as Ludo reversing his car into a tree and breaking a rear light but not nearly as disappointing as Fattaur getting his car stuck on a wire that holds up a telegraph pole. You think that would be enough carnage for the day but the last dose of fail was a spilled milkshake in McDonalds.

I haven’t had that much Fail in one day for ages and I didn’t even mention Lee’s swim on the Tavy. 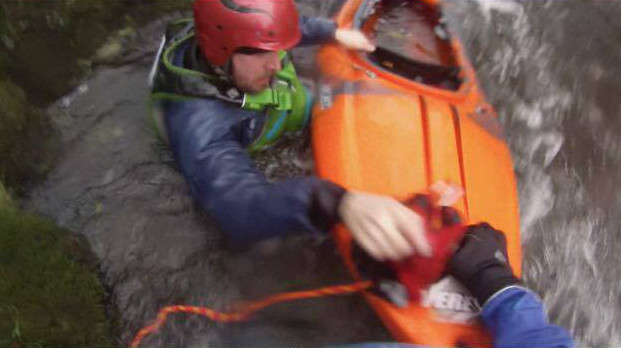 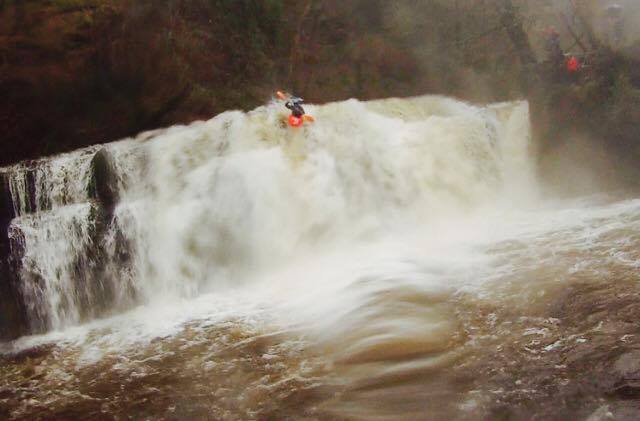